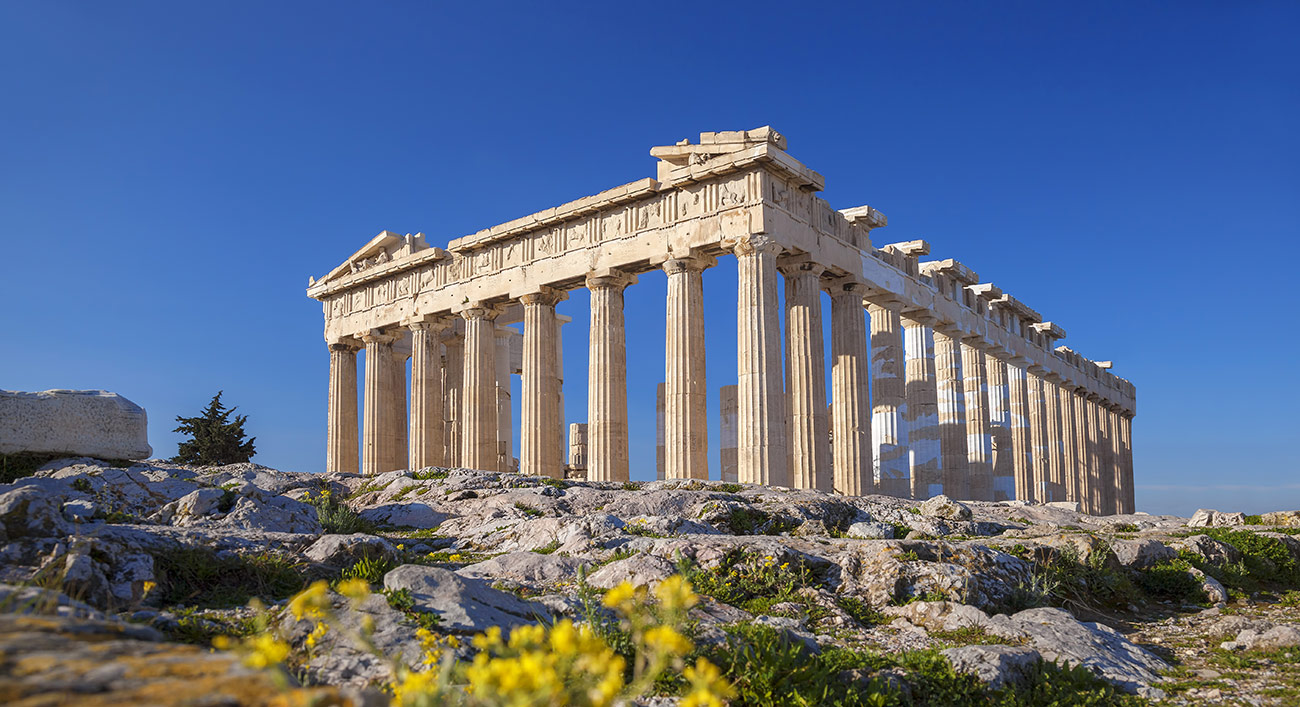 In part one of a five-blog series, we ask: “What if history had BIM?” In this inaugural feature, we look at Ancient Greece’s iconic temple on the Athenian Acropolis and examine how Building Information Modelling would have impacted upon the construction of the Parthenon.

Whether you appreciate the mathematical precision of its design, the artistic vision and social commentary of its embellishment, or the astonishing fact that it has survived for millennia, the Parthenon stands out as an outstanding cultural monument. Constructed in the 4th Century BC, we have limited insight into the method of its construction and the team behind it, but by all existing accounts, the effort and cost that went into completing it were enormous.

The Greeks understood the connection between mathematic principals and beauty as integral to their cultural identity. It was a key capacity that set them apart from the – from their perspective – surrounding barbarian peoples. The Parthenon was constructed on ‘perfect’ mathematical ideals to represent a Greek vision of natural harmony in its proportions and design. A ratio of 9:4 was implemented on multiple levels, from the overall proportions of the structure along the vertical and horizontal axis, as well as in space measurements between elements such as the columns.

The maths, while theoretically simple, was further complicated by the need to convey complex concepts visually in the structure. Despite the overall geometric nature of the structure, there are no completely straight lines. For instance, the columns both bow along their length and taper outward near the top, subtly conveying an organic, or even anthropomorphic sensibility to the Parthenon while shaping sightlines and suggesting weight and responsiveness. Further, seemingly identical elements, such as the columns, vary in dimension depending on their placement in order to affect the viewers’ sightlines as if they are identical.

Presumably, to ensure the construction conformed to such socially proscribed, philosophically elevated ideals and visual standards, painstaking calculations would have been worked out manually for every component and measurement prior to the start of construction. Then the measurements would have been copied – again, by hand – and applied separately by overseers and construction workers to implement. Impressive, deceptively complex and monumental as the Parthenon is, it’s hard not to wonder what it would be like to recreate such a structure today. How long would it take? How hard would it be to achieve the same precise specifications? How would the cost stack up? With today’s tools – Building Information Modelling (BIM) in particular – just how would the experience, and even the finished product, have changed?

Did you know...
The rectangular building (measured at the top step of its base to be 101.34 feet by 228.14 feet long) was constructed by brilliant white marble, surrounded by 46 great columns, roofed with tiles, and housed a nearly 40 foot tall statue of the goddess Athena. The statue, known as Athena Promachos, Athena the Champion, was made of wood, gold and ivory and could be seen from a distance of many miles.

The computing options of today provide a clear advantage; simply performing ratio-based calculations is a near-instantaneous function. With BIM, today’s architects, designers and engineers have the opportunity to take principles like a theoretical ‘perfect ratio’ as used in the Parthenon and easily experiment with scenarios in collaboration with one another. While the design stage still requires a great deal of creative input to identify and refine direction, the calculation and modelling of plans is quick and highly collaborative in the online Common Data Environment (CDE).

Both the overall structure of the Parthenon and the numerous, detailed embellishments situated on and within it are situated to interact with viewers along carefully considered sightlines. The regular visitor to the Parthenon was not intended to enter the structure, but to move along the outside of it, experiencing it from below. Both the placement of embellishments, as well as structural design elements had to carefully consider that sightline. For example, some columns were built with slightly larger diameters than their fellows to counteract the optical illusion of narrowing when seen against the blue sky. With BIM 3D rendering, the fallible imaginative work of identifying the correct sightlines at any given point is transformed with access to a fully developed digital model to test – and adjust – the design from every angle well before the first stone is laid.

The tightness of team coordination available through BIM is unmatched. Far from hand-making multiple potentially contradictory or out-of- date sets of paper plans to be sent out to partners on the design, engineering and building teams for review, refinement or implementation, BIM’s CDE offers an accessible shared workspace with the latest plans, data and communications always available for real-time collaboration and reference. It’s truly astonishing what the Greeks were able to design and construct over two millennia ago, with slow and limited processes, resources and communication. We can only speculate about how much frustration and re-work must have gone into the astonishing achievement that is the Parthenon.

4D BIM refers to the additional component of scheduling integration with the CDE design, planning and construction. Linking scheduling information to every phase of the project not only helps catch potential missteps before a costly and unprofessional mistake is made – say, heavy outdoor construction during the rainy season, or booking the sculptors before the lintel is ready to go – but it supports better estimating and resourcing. Maintaining the schedule as the project develops allows quick, informed and flexible adjustments when needed, intelligently manages the budget and facilitates efficiencies for suppliers, team members and the client. The Parthenon took over a decade to complete, including all ornamentation. Perhaps a 4D BIM implementation could have offered the chance to consolidate the schedule – at the very least, it would have let the client and team know up front what kind of duration to expect.

Constructing the Parthenon was undoubtedly a massively expensive undertaking. While it’s impossible to pinpoint the exact currency conversion rate, the Parthenon was said to have cost 469 silver talents, nearly half the gross annual income of the city of Athens. With BIM 5D, the detailed plans of the CDE can be associated to cost projections, allowing accurate and adjustable estimating prior to and during development. Not only that, but the detailed modelling, 3D rendering, CDE plans to ensure the most accurate, up-to- date documentation is in place, and 4D schedule management have the potential to represent significant cost savings over a traditional – or in this case, classical – development. With BIM, the Parthenon would have benefited from accurate cost- projections and, almost certainly, a financially tighter production cost.

Could a skilled team today produce a more beautiful, more complex version of the Parthenon with Building Information Modelling? Philosophy of art and mathematics aside, they could certainly have an easier time collaborating and refining their ideas than the Greeks of the 4th Century BC. Materials and labour costs aside, BIM absolutely offers an advantage when it comes to maintaining and sharing documentation, modelling and rendering plans, scheduling and managing costs. Hats off to the brilliant minds, painstaking work and unrelenting spirit that produced this amazing cultural triumph the old-fashioned way!