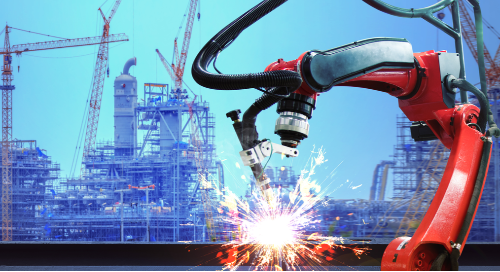 When humans talked about robots 20 years ago, it was mostly still the stuff of imagination. Back then, we could barely envision a world where fully automated machines could effectively complete tasks that were previously the sole domain of humans.

But, fast-forward to 2018 and those visions are becoming more of a reality every day. That reality has less to do with the humanoid robots we’ve seen in movies, however, and more to do with the roles automation can effectively fill to move industries forward. As technology and AI progress, virtually no industry has been left untouched. Construction is no exception. While automation in some form has been part of construction for years now, recently we’ve seen more advanced robotic technologies infiltrating the construction of all sorts of things. These advancements beg the question:

How long will it be before robots build everything?

The short answer is: a long time. But let’s take a look at some of the most meaningful ways robotic technology is making inroads into the construction of all sorts of things today, and whether or not we actually need to worry about a time in the future when humans will be expendable in this industry.

Robotics and automation are not new to construction

There are already many different aspects of construction where technology can play a meaningful role.

One common example is BIM, which adds layers of data, portability, and 3D visualization to traditional construction design and planning. When linked to devices in the field such as robotic total stations, laser scanners, and augmented reality headsets, visualization and data are further enhanced and a feedback loop is established. Various software applications from all phases and disciplines — ranging from estimating to jobsite management to facility management, and beyond — can be linked to the BIM software for a fully integrated system. All of these solutions help contractors, project managers, and others plan, execute, and manage the details of construction projects with greater speed, efficiency, and reliability than ever before.

Robotics and automation are already part of this conversation. For example, the robotic total stations (RTS) mentioned above have been in use for many years. The RTS allows one technician to layout a site up to five times faster than a two-person team using manual methods, and with greater accuracy. Likewise, automation is becoming more and more common in prefabrication facilities. With the quality control and efficiency of a factory, modern fabrication machinery can download data from a BIM model, then fabricate and pre-assemble units, which are then shipped to the jobsite for quick installation.

So, it would be wrong to think that construction robots are a brand new addition to the industry. However, it is true that emerging technologies, including artificial intelligence (AI) are leading to rapid expansion of the role robots can play in construction as well as the long-term feasibility of using them.

While planning and oversight have been immersed in technology, the jobsite itself has been much slower to adopt robotic labor. It’s not that the technology hasn’t existed, because it has.

For example, the first patent for a bricklaying machine was issued over a century ago in 1904. Several other attempts were made over the following decades to automate this process, but none of them caught on because they were simply not practical or efficient enough to justify widespread adoption. We’ve only recently seen progress on this front as 3D printing, AI, and lower cost robotic components have led to renewed interest in automated bricklaying, one of the few tasks robots can perform with anything approaching commercially viable practicality.

Auburn University in Alabama used robotics in masonry as part of the construction of its new Jay and Susie Gogue Performing Arts Center in the summer of 2018. They used the SAM100 (the name stands for “semi-automated mason”), which can lay 3,000 bricks per day via a conveyor belt and arm, working alongside human masons. The university worked with C&C Masonry, which leased the robot for the project.

“You load the pattern on a computer system,” he said. “So you build the wall on your computer, transfer it to the tablet, and it tells SAM where windows are (and) controls joints. Anything that’s in the wall, he automatically calculates it and then he’ll lay the wall as you laid it out.”

While exosuits have yet to bestow upon construction workers all the powers of Iron Man, they are certainly ripe for growth, according to Dana Kara, a former robotics researcher at ABI Research. ABI predicts that the exoskeleton market will reach $1.8 billion by 2025. Still, the firm acknowledges that although plenty of companies are manufacturing these exoskeleton suits for construction and manufacturing use, few construction companies have adopted them.

The day when we’ll see construction sites manned by robots may still be far off, and it still seems unlikely that these technologies will ever completely replace humans. Still, there is exciting potential to be realized in what’s to come and in the current technologies that allow managers to maintain a real, and real-time view of their projects and to increase efficiencies, speed, and safety through automation.