The exosuits, or exoskeletons used within the construction industry are ripe for growth, says Dan Kara, who until December led research focusing on robotics at ABI Research, a technology business research firm.

What are robotic exoskeleton suits?

Take a look at this OSHA compliance guide to learn more.

And the construction industry will be taking to these wearable powered or unpowered robotic exosuits in great numbers, at least according to one analysis.

One reason the robotic suits are ripe for adoption by builders is their falling prices, Kara says. To take an example, two types of suits, the Chairless Chair and the EksoWorks Vest, sell for about $5,000 each, far less than the type of full-body suits that help those who are paralyzed walk.

From U.S. military project to healthcare and beyond

First developed by the military, the exoskeletons have been making the move from healthcare into the manufacturing and agriculture industries, where employees also carry and transfer heavy loads and move in a repetitive manner. In healthcare, the suits help stroke victims regain limb strength or even help those who are paralyzed walk or use their arms.

Around 1965, General Electric started to develop the Hardiman, a large full-body exoskeleton designed to augment the users’ strength by a factor of 25 to help them lift heavy objects. The project, sponsored by the U.S. Army and Navy sought a machine that could help move cargo or equipment. The exoskeleton weighed 1,500 pounds and was made up of two suits, one attached to the operator and an external one that carried objects.

The machine’s heavy weight as well as issues putting it on and taking it off caused exosuit development to stall for a while.

But around 2000, exoskeleton robotic suits became increasingly accessible to users in the healthcare. One of the first applications, Lokomat, is used for gait rehabilitation in stroke and spinal cord injured patients, who wear the suit while walking on a treadmill.

Around 2015, the suits made their way into industrial applications.

For example, Ekso Bionics announced an expansion into the construction industry and other industries alike with the Ekso Works Industrial Exoskeleton. The suit allows the user to be able to lift power tools as if they don’t weigh anything at all, according to Ekso.

Make sure your building construction site is as safe as possible.

Exoskeletons can be either passive— that is, without the use of actuators, motors, or batteries to help with lifting or hauling—or active, which use actuators to aid in these activities.

Typically for use in the construction and manufacturing industries, passive systems are popular, as these suits are less expensive and actuators are not necessary to relieve the exoskeleton user of a payload or bodyweight.

This Ekso Works Industrial Exoskeleton, for example, has an unpowered frame, meaning it’s a passive suit without actuators or motors. It can be used all day, according to Ekso.

“Unlike the exoskeletons built beforehand that could only be used for limited amounts of time due to the battery life, this could be a game changer,” Ekso says.

In construction, manufacturing, agriculture, and other industries that are adopting the robotic structures, the exo-suits augment human motion to allow for more lifting strength and for improved production on repetitive tasks like squatting, bending, or walking, Kara says.

Those wearing the exosuits will also be less prone to severe injuries from accidents or overwork. Worker overexertion costs U.S. employers around $15 billion annually in compensation, Kara adds.

Take a look at this guide to learn more.

And construction workers rack up more than their fair share of overexertion injuries. In fact, they have some of the highest rates of musculoskeletal disorders per capita, according to the Bureau of Labor Statistics. Those type of injuries reduce the number of years construction workers can do their jobs and may even cause permanent injury.

Types of exoskeletons for construction workers

In recent years, developers have focused on smaller, more specialized exoskeleton projects that target a particular body part, though full body suit are also in use.

With that in mind, today’s exoskeletons fall into varied categories. 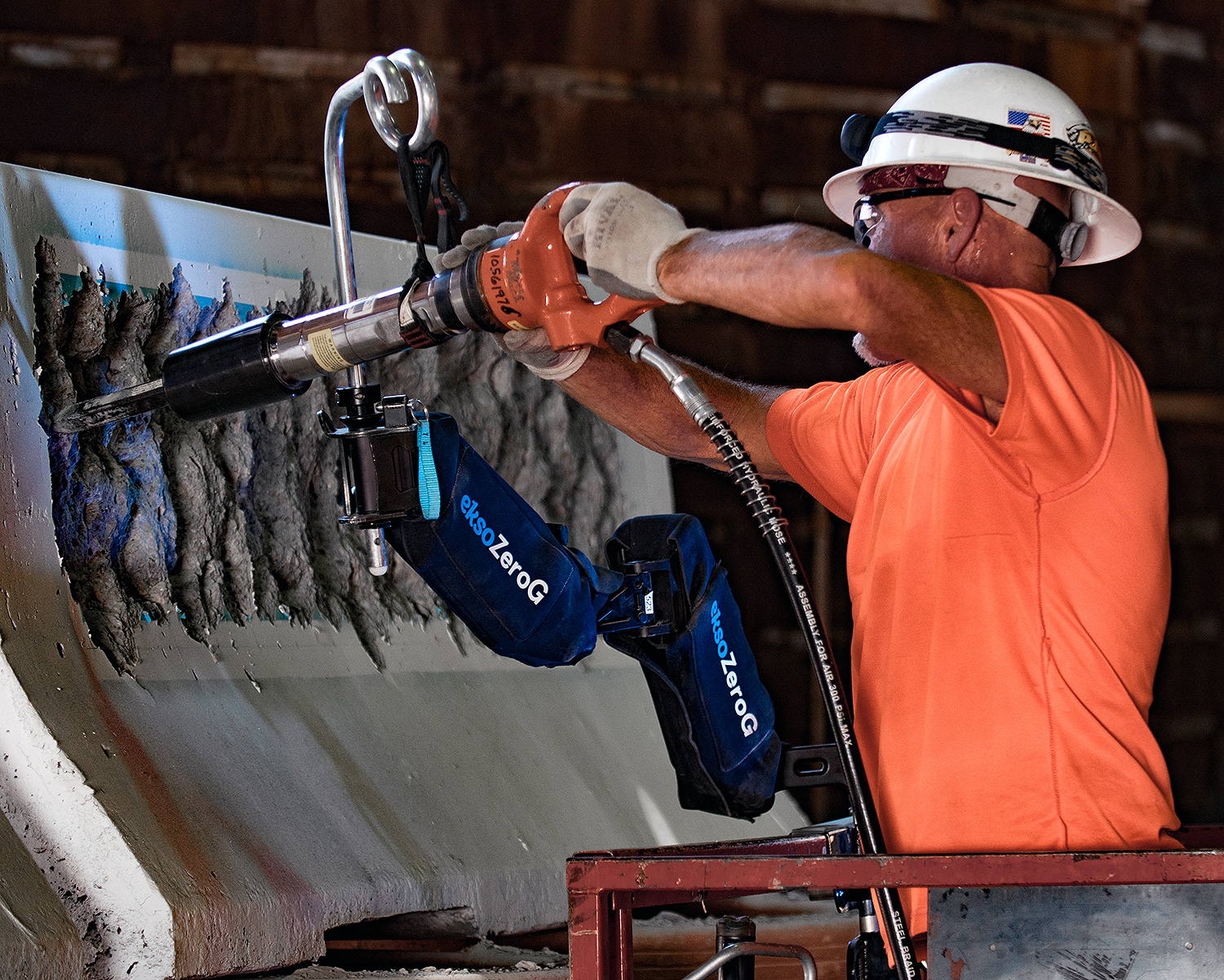 Tool-holding exoskeletons are composed of a spring-loaded arm that holds a heavy tool on one end and is connected to a lower-body exoskeleton and a counterweight. The weight of the tool is transmitted to the ground. These exoskeletons are usually passive and sometimes contain only one joint, which is sufficient to provide weight support.

Examples here include the EksoZeoG, from Ekso Bionics. The mounted-arm exoskeleton isn’t worn on the body, but rather workers control the arm by placing their hand at its end. The exoskeleton helps workers use heavy hand-tools quickly so they can complete jobs faster, with less fatigue, and better workmanship, according to Ekso. 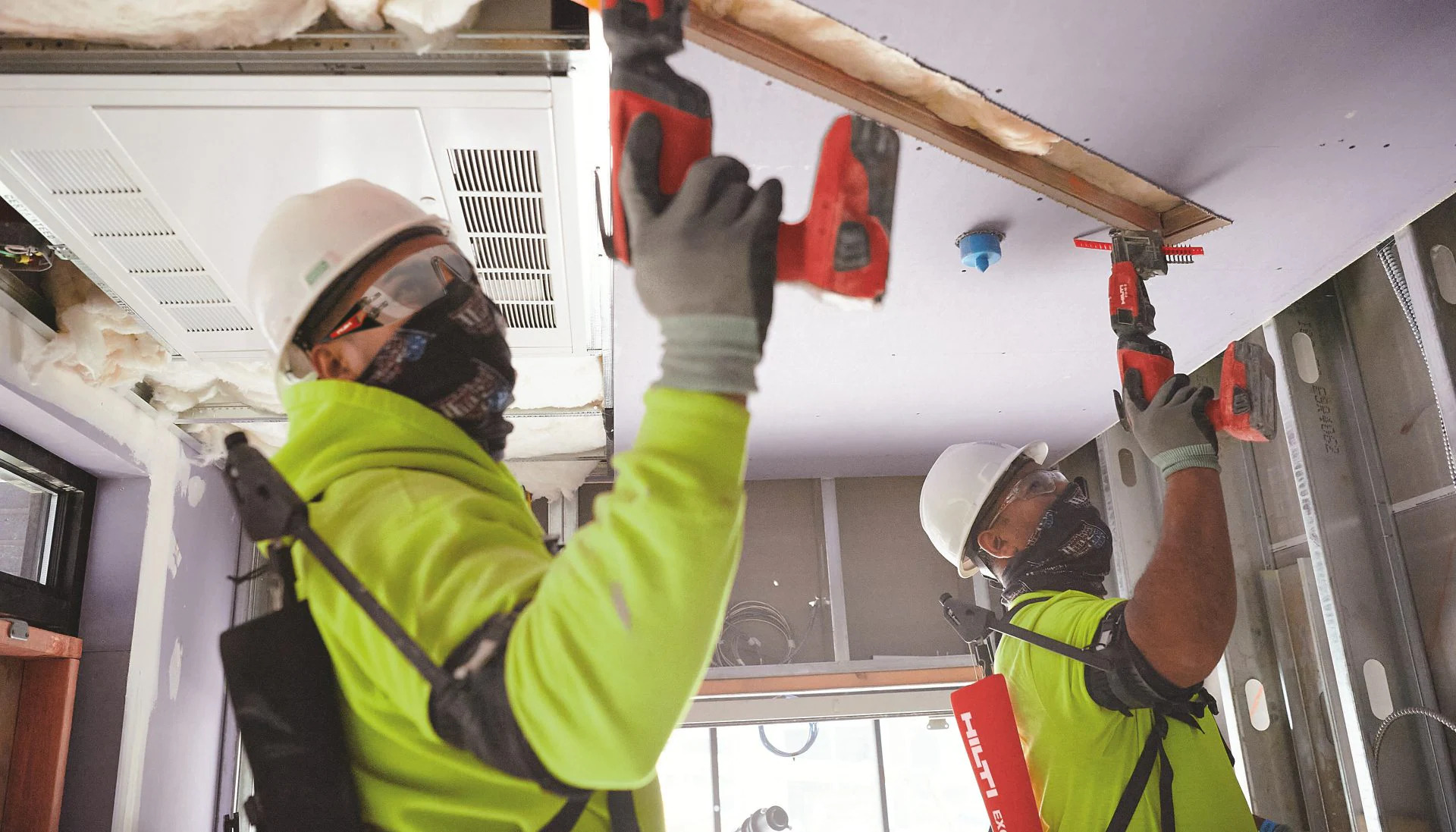 Exoskeletons that offer arm, neck, and shoulder support aid workers as they perform  overhead installation work such as installing ductwork or sprinklers. They reduce the load on the arm and neck muscles while cutting down on repetitive-stress injuries. They also provide passive, dynamic support without restricting the range of motion of the torso and arms. 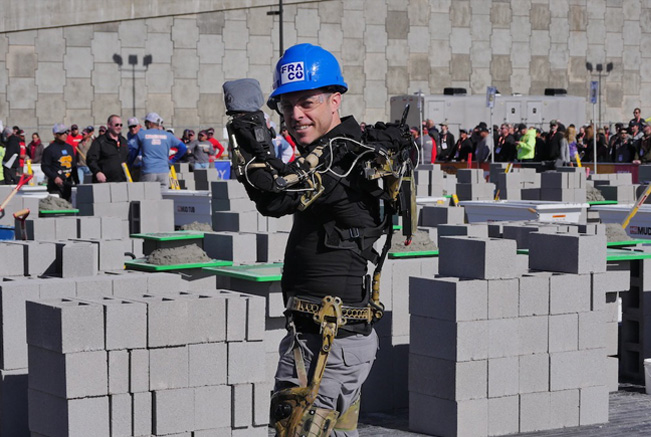 Some suits are simple arms that help workers lift heavy tools while fuller exoskeletons offer shoulder or arm support. The Fraco Exoskeleton by Mawashi is a hybrid system combining passive and quasi-passive actuation to support and assist masons in lifting and placing masonry blocks as well as manipulating masonry tools. It uses litte power, but provides ergonomic upper body and arm support that makes objects seem to weight much less than they do, and enables a worker to do a variety of tasks without fatigue, according to the suit makers.

An example includes the Chairless Chair from Swiss company Noonee, which locks into place when a worker has to crouch or stand for prolonged periods. It reduces the pressure on the knee and the rest of the leg, Noonee says. 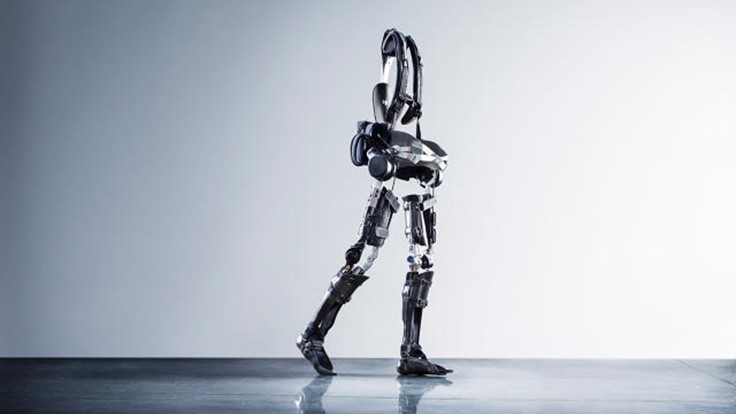 When workers wearing an exoskeleton from SuitX bend forward, for example, compressed-air springs in the back of the suit take some of the lifting load off the wearer. A shoulder unit uses a similar assist-mechanism for lifting or working overhead, says Homayoon Kazerooni, chief executive officer at SuitX of Berkeley, Calif., which makes exoskeleton systems for the legs, back and shoulders as well as a full-body version.

Because the exoskeletons are relatively new to the construction and manufacturing industry, builders are looking to see how they fare at the manufacturing plants that are testing them. The two industries have a great deal of overlap when it comes to standing, crouching, lifting and moving heavy objects, and making repetitive motions.

Eleven lower-body exoskeletons are already also in use across several BMW Group automotive production plants in Germany. The exoskeleton consists of movable splints affixed to the legs or torso and locked in different positions. The leg support structure can transform prolonged standing into sitting to improve the comfort and flexibility of working conditions, says Christian Dunckern, Head of BMW Group production system, planning, toolmaking, and plant engineering.

German carmaker Audi is also using the Chairless Chair on the production floor, though Mathias Keil, head of industrial engineering methods at Audi AG says the exoskeletons haven’t been in use long enough to assess results. Audi also expects the robotic suits will be used down the line by workers with physical disabilities even if they don’t work directly on the assembly line, he adds.

Some construction companies are working closely with exosuit developers to ensure the suits meet their needs.

For example, in November, Gammon, a Hong Kong construction company, announced it purchased 10 Assist Suit Exoskeletons. Gammon will be conducting trials of the suit on its construction site for the developers, Panasonic subsidiary Atoun Inc. and Shun Hing Systems Integration Co. Ltd. The construction company will give feedback to developers with the intent to help further improve construction safety, efficiency, and productivity.

Kara claims that the growing construction industry will be adopting these types of exoskeletons in greater numbers. The recent advances in technology will help to make the construction site a safer and more efficient place.

To reduce your risk and stay compliant, take a look at this free guide: OSHA Construction Safety Rules You Need to Follow.

Jean Thilmany is a freelance writer living in St. Paul who frequently writes about engineering, robotics, and construction.