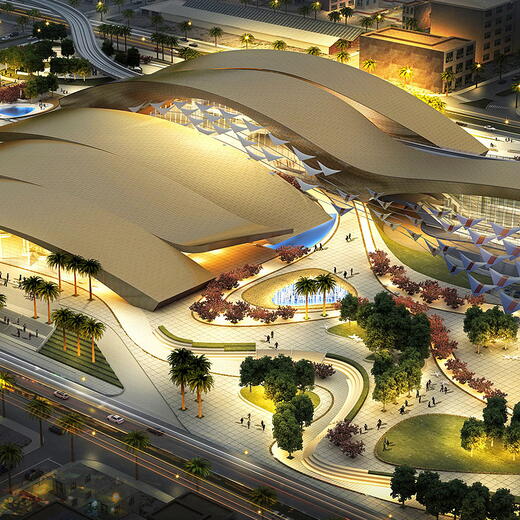 Riyadh's new six-line metro - the world's biggest urban rail project outside China, broke ground in 2014 and is a huge step from the Kingdom of Saudi Arabia towards the future of transportation. Relying mostly on taxis and buses, this will be a revolutionary leap in the infrastructure for Saudi Arabia, which will be a big contribution to the broader Saudi Vision 2030.

Consisting of over 176kms of fully-automated metros serving 85 stations, the design for this remarkable 110,000m2 project aims to be a catalyst for the Kingdom's urban development.

A total of over 56,000 people have worked on the project, which includes on-site workers, engineers and designers who created a design that was reflective of local culture and heritage, which is a signature multi-model hub for the new Riyadh transit system.

Role of AIC in the Project

AIC was responsible for 3B2 Western Station which is one of the largest iconic stations of the Riyadh Metro Project. The project included: Above-ground Metro Station (with 34,155 m2 area), Bus Station (with 3,500 m2 area), Underground park & Ride Facility (with 39,295 m2 area) and a Mosque (with 2,330 m2 area). AIC was tasked with the entire steel structures of this station including but not limited to all connections designs, detailing, fabrication as well as erection of the structure.

With references to the Kingdom’s dominant desert landscapes, oasis and palm groves, this building’s design is a modern interpretation of the desert sand drifts. The design and engineering phases for such a project naturally produce a considerable amount of details and specifications. Designers need to consider all relationships between components and related conditions for presenting details as accurately as possible. However, coordinating between different details of the project specifications can lead to errors if executed manually.

Due to having such an exquisite and modern architectural design, the nature of the project was quite complex and needed extra attention to detail by the AIC team.

Western Station - Complexities of the "Sand dunes in the desert"

Previously in projects of such magnitude, countless alterations were usually needed after just one change, and ambiguities, gaps, and conflicts are expected to be discovered when changes are made. Furthermore, designing such a huge project requires a large workforce to prepare details and maps hence early detection of conflicts in some cases was not possible. Then there is the multiple stakeholder factor, complexities can arise especially when different traits of a project are designed by different companies due to the variety of needed expertise in the project, it is necessary that these companies work together in the design phase of such a complex project.

Talking more specifically about the Western Station project included: Above-ground Metro Station (with 34,155 m2 area), Bus Station (with 3,500 m2 area), Underground park & Ride Facility (with 39,295 m2 area), and a Mosque (with 2,330 m2 area). AIC was tasked with the entire steel structures of this station including but not limited to all connections designs, detailing, fabrication as well as erection of the structure.

To implement the unique architectural structure of the dunes, be it in the complex detailing, shop drawings, fabrication, or the construction phase, a high amount of coordination and management was needed for all parties to achieve the best results.

Various Trimble hardware and software had to be orchestrated for the project; the execution and delivery, if not for model-based design and data-rich information, would not have been possible to achieve the desired level of detail.

“Trimble's Tekla Structures played a crucial role in the success of this project because of its powerful and intuitive 3D BIM modeling, huge connection library, and no site fit-up issues," explained Mohamed Ezzat - PMP, who is the Head of Technical Team at AIC.

For the wide column-free area, Tekla software made it possible to execute a complex system of main and secondary trusses, infills, and bracing had to be placed with a ‘knotted arrangement,’ in addition to including purlins and facade support systems.

The connections between the dunes members were also challenged by the multi-member joints with different slopes and orientations. Avoiding the clashes in such cases would have not been done without intelligent 3D BIM software as powerful as Tekla Structures with its parametric macros.

"Using our internally developed plug-ins in Tekla, helped AIC Steel immensely in facilitating and accelerating our modeling, drawings, and fabrication workflow,” added Mohamed Ezzat - PMP. For the wide column-free area, Tekla software made it possible to execute a complex system of main and secondary trusses, infills, and bracing had to be placed with a ‘knotted arrangement,’ in addition to including purlins and facade support systems.

Using Tekla software extensively for detailed shop drawings for e.g., was a great start, but if we talk about Building Information Modeling this is one more leap towards connected construction to truly reap the benefits of BIM in its entirety.

The next step for AIC was to utilize this extensive and data-rich information generated from Tekla software on their factory floor. Traditionally, project managers depend on the QA teams to prepare drawings in 2D for the assemblies as well as the excel sheets for the coordinates which are then passed down to the factory survey teams. Using manual total stations the coordinate files are imported in excel for assembly points and this practice is still in effect by many contractors today.

This entire manual process of the back and forth with the survey team, changes being made on the excel as well as deficiencies in communication, can cause major delays in execution at the expenditure of the hard work put in by the entire team.

To avoid such complications in their project, AIC incorporated Trimble's Robotic Total Stations into their workflow which is specifically built for contractors to increase efficiency and reliability of their job site layout tasks and measurements. 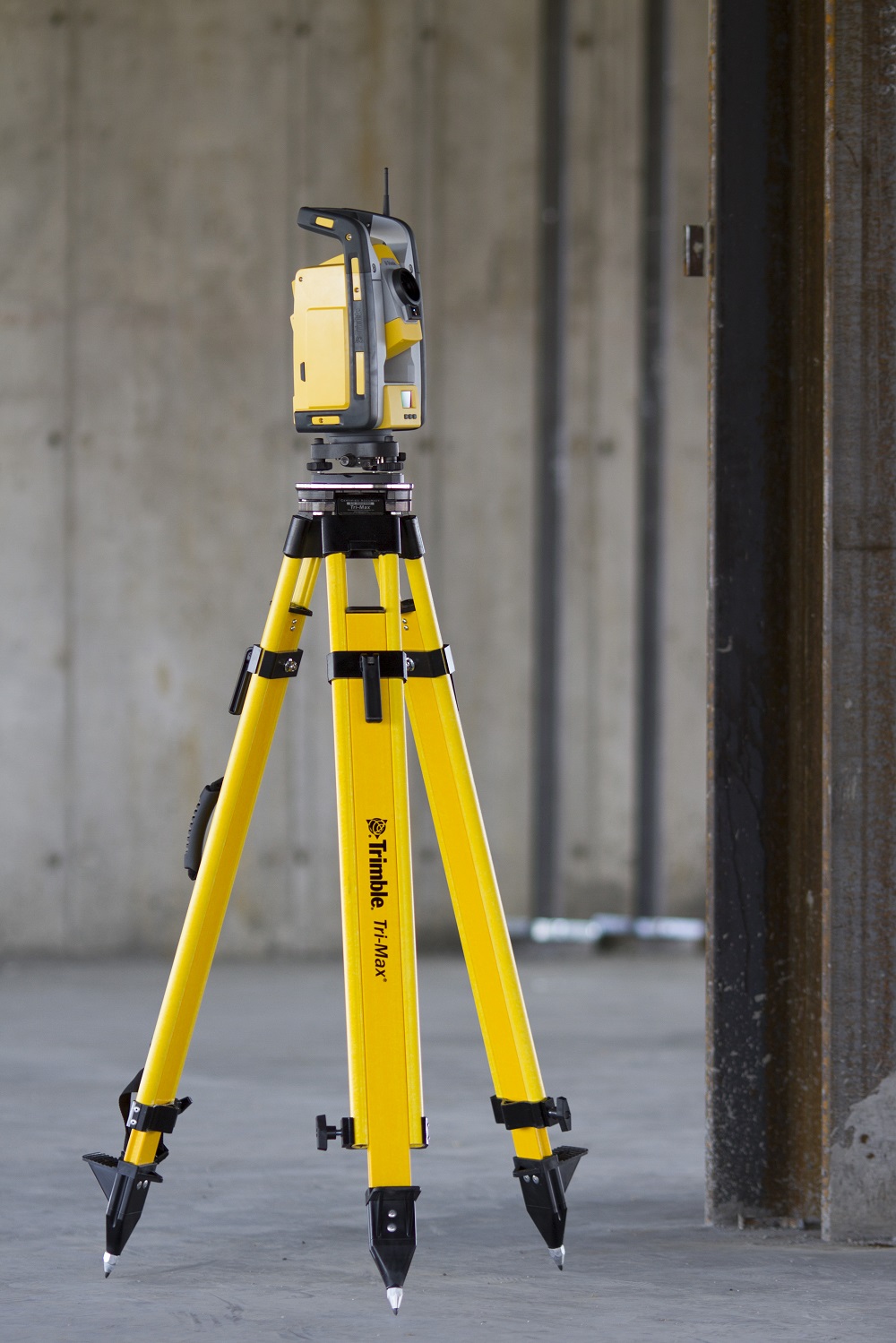 The idea of upgrading to a Robotic Total Station, from manual mechanical equipment, like any change in a process comes with uncertainties. Project teams may believe there is nothing wrong with the way they are already doing the layouts. There is also reluctance due to the learning process of adopting and incorporating a new piece of technology into workflows.  But while it's natural to have such doubts in the occurrence of change, the advantages that came with using Robotic Total Station for layouts are impossible to ignore.

Using the Trimble RTS added an extra dimension to how AIC Steel viewed their project; they were now working directly with a 3D model, that allowed them to gain speed and precision that far exceeded what was possible with a manual layout tool.

The immediate change that the Robotic Stations brought to AIC's workflow was that as the RTS allows remote operation, it eliminated the need for an assistant staff member as now one qualified operator was in control of the entire process. With the rest of the team now available to execute other tasks, it resulted in faster more accurate layouts, improved handover, with great accuracies due to real-time data accessibility. 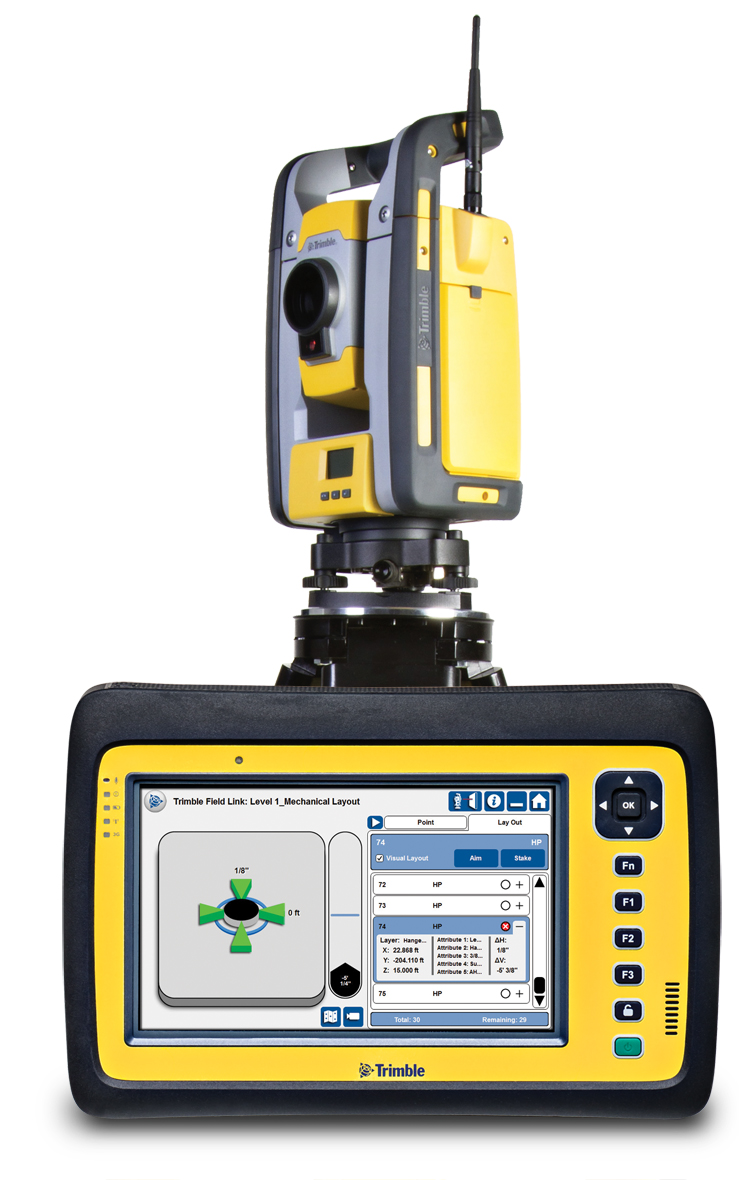 Trimble FieldLink offered AIC's team a flexible, scalable field layout solution that performed 200% better than traditional workflows. The ability to be able to visualize the 3D model of the assembly at the factory floor and to actually build from it empowered the team to deliver accurate layouts quickly, and ensure design intent is executed correctly the first time.

After witnessing a productivity gain of 30% in their assembly jobs, now AIC has mandated the use of Trimble RTS on the factory floor and also prepared an internal process to use it at the early assembly stage.