Ale Spray presents at Mortenson's Coffee with the Contractor event in Denver.

Mortenson's Alejandra (Ale) Spray has a message for the construction industry: Women and minorities are ready. Ready for their hard work and experience to be noticed and speak louder than their race or gender. Ready for a seat at the table. “My dad was the first one to say, ‘No, construction is not for women,’” Spray laughs, “And I said — well I don’t like to cook, I’m pretty bad at sewing, so I guess I’m just going to be an engineer.” Here, Spray offers her take on what women and minorities want out of their employers and outlines five ways construction companies can support and retain diverse talent.

As evidenced by that first conversation with her father when she told him she wanted to attend ITESO Universidad Jesuita de Guadalajara to pursue a degree in Civil Engineering, Spray, Business Development Manager — Community Engagement at Mortenson, has a habit of challenging expectations.

After ignoring her father’s advice and getting her degree as planned, Spray dove headfirst into the construction industry — first as a project engineer, then as a translator, marketing director, and now in her current business development role at Mortenson. “I’ve always been interested in how we change the landscape around us, and seeing a paper drawing transform into a building,” explains Spray. 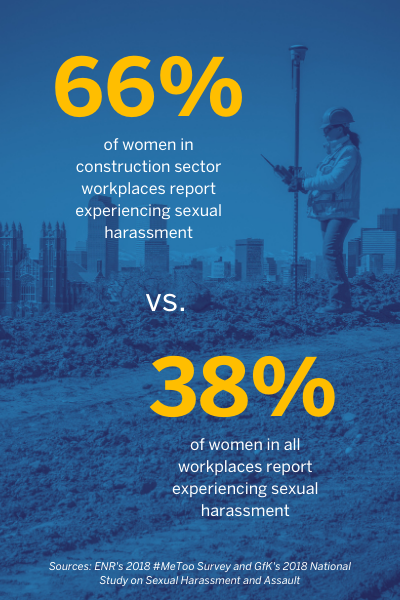 Despite her drive, she quickly realized her father's fears weren't totally unfounded. “In Mexico, being a woman in construction is really challenging because they automatically make you the admin on the jobsite — you’re there just to keep track of paperwork. And harassment is pretty hard over there. There were no policies to address the issue or consequences for harassers. You just have to shake it off and move on.”

Spray describes her experience with Mortenson as far different and her role there as a natural fit, combining her construction background and marketing chops with a bubbly personality and love of connecting with others. She calls herself a liaison between subcontractors and her clients. “In business development you have three clients, and they are all important: Your clients that give you the work, your clients that help you do the work and your clients that actually do the work in the field.”

Well-honed relationship-building skills ended up landing Spray more than her dream job. She's become one of Colorado's strongest advocates for diversity, equity, and inclusion in the construction sector —  becoming a go-to mentor, advisor, and member of organizations including the State of Colorado's Minority Business Advisory Council, Hispanic Contractors-Colorado, Mile High Youth Corps, and more. "Little by little, people started inviting me to be part of panels in construction and women in construction outreach. My name started getting around, you know — ‘Call Ale' for any referrals or career fairs or just advice," Spray says.

Spray acknowledges there are no silver bullets when it comes to making long-term change to the construction industry, but she has a few suggestions for companies who want to start.

What can the construction industry do to be more inclusive of women and minorities?

1. Focus on tangible solutions instead of bold promises

Even before protests were sweeping America in the summer of 2020, there has been a rise in 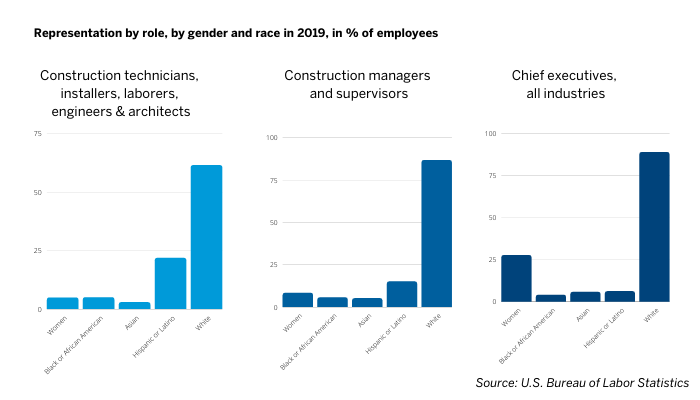 attention given to the lack of diversity within the workforce, particularly in leadership positions. Encouraging steps have been taken. For example, women now have a seat at the table of every S&P 500 company. And, according to SpencerStuart, 59% of the new independent directors joining S&P 500 boards in 2019 are women and minority men.

But the overall lack of diversity in the workplace, especially as one moves up the management chain, is disheartening — especially in construction. That’s why Spray urges companies to challenge themselves to do more than talk about diversity and inclusion because it’s trendy. Instead, she wants them to step outside of systemic bias within the industry and their own walls and dedicate time, intention, and resources to driving meaningful change. 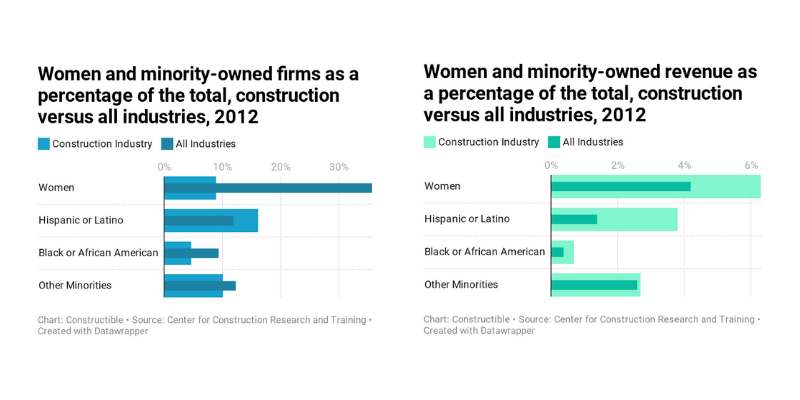 Spray offers up Mortenson’s Community Participation Program as one example. “We have a goal on all our projects to have 15% participation from S/M/W/DBEs — Small, Minority, and Women Disadvantaged Business Enterprises. It’s part of Mortenson’s culture that we empower our workforce and its diversity by hiring minorities and women. And that extends to who we do business with on projects,” says Spray. “We want local communities to thrive, and to create jobs in the community.”

“Part of my role is expanding that database of S/M/W/DBE contractors, and connecting them to our projects, introduce them to other companies and projects, and helping them grow to whatever capacity they want to be,” continues Spray.

Spray’s focus at Mortenson is important because as she puts it, “You cannot be what you cannot see. You have to see yourself in another before you can become that. We see a few women at the C-level, but do we see many African Americans or Hispanics? Typically, no.”

And while Spray loves that companies are doubling down on their DEI efforts, she notes that in the construction associations — the AGCs and ABCs of the world — they still look much the same as they ever were, a majority of  Caucasian, middle-aged men.

Spray points out that this lack of role models starts even before many workers even land their first job. “Some of these kids don't have parents that have had college experience. So, they can’t call their parents and ask, ‘How should I pick a major?’ or ‘I’m having trouble with my counselor, so what should I do?’” The exact same problem can occur when navigating their first job. They can’t ask their parents for help with interviewing or getting feedback.

“If you don’t see yourself in college, or as a manager, or in the C-level, how can you even aspire to be that?” Spray asks.

3. Stop saying, 'We want to promote somebody, but there’s no talent'

Part of what attracted Spray to Mortenson was their well-defined opportunities for women to grow a career. “What works for one organization may not work for another, but in our company, we have specific committees,” explains Spray. “We have a diversity and inclusion committee, a trade partners relationship committee, and others. So, we can start identifying those people who show potential and want to keep growing. We identify people not based on their present title, but how hard they are working, how they rally the troops, how they inspire others, and if they have the desire to be more.”

Spray says it’s important for organizations to help promising individuals polish their soft skills and invest in additional education and training. “We believe in you — that’s what you’re telling someone when you can activate DEI initiatives for minorities and women across all levels and functions,” Spray adds. Then that excuse of lack of qualified talent really disappears.

4. Women and minorities have to invest in themselves, too

Spray talks a lot about sacrifices. “Sometimes they pay off right away, sometimes they pay off in several years,” says Spray.  “It is hard, as a woman, a mom, a caretaker of an aging parent — missing a couple of nights with the family and sacrificing nights and weekends to learning and networking.” 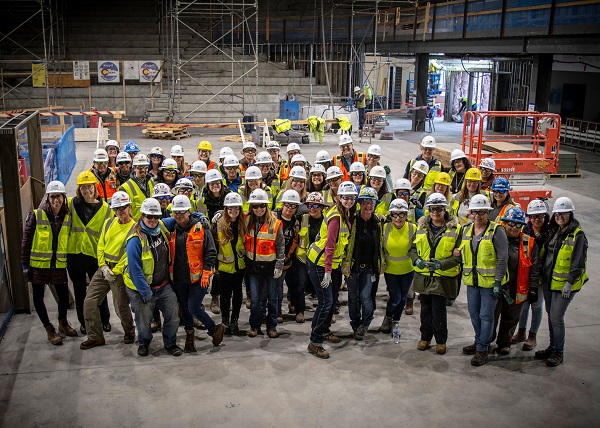 Spray has had to build a thick skin over her career and she quickly realized that just because you earn a spot or get an opportunity doesn’t mean you can stand still. “It’s not just about you being the first one, it’s about pushing that door open for other people to come and do it too.”

Sometimes it’s even about asking the hard questions and fighting for what is right. As Spray puts it, “If your company doesn’t care about building a workforce that is diverse in ethnicity, gender, experience, ideas, and backgrounds, it might be time to ask them, ‘Hey, if you don’t stand for an inclusive culture where everyone feels valued, what do you stand for?’ And if they can’t give you a good answer, you might need to move on.”

5. Understand that diversity has dimensions

Rectifying the inequities that exist for minorities and women in the construction industry is a good start, but there are so many other ways to think about diversity as well. Sexual orientation, religion, disability, socioeconomic status, or even education level.

"It's so great when an association sets up a young professionals board and those members come in with new ideas," she explains. "What I would love to see is more credence given to those ideas. The more perspectives you embrace, particularly as a construction trade organization right now, the stronger you will ultimately be. We must listen to the next generation of our workforce.”

Living in the diversity paradox

"We are all human and we all want to succeed," says Spray. "I hope we can get to that place because I just love this industry. I love driving downtown and telling my kids I was part of that project, or when one of my mentees gets a promotion. There are so many rewards in the industry, and I’m going to keep fighting for more people to be given the opportunity to see the benefits of those rewards."